The proposed budget for Peachtree Corners fiscal 2013 is now available.  Click here to review the budget and see how the council plans to spend $2.7 million of your money.


The next 3 council meetings: June 14, June 19, and June 26 are all expected to deal with the budget, expenses, and proposed taxes to fund it all.  Please come to all the meetings you can.  They are held at the YMCA at 7:30 PM.
Posted by Peachtree Corners Ballot Committee at 12:30 PM 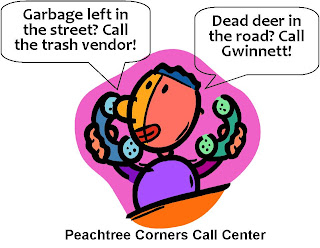 The Peachtree Corners City Council met Tuesday night, sans Post 1 councilman Phil Sadd. This is the third or fourth meeting he has missed, and we're not even a city yet...Doesn't bode well for District 1.

There were about 30 residents in attendance.  Also present were city clerk Joan Jones, consultant John Kachmar and city attorney Bill Riley and his assistant.

No residents made any public comments, although there was an opportunity to do so. The mayor introduced the city's new 'comment card' which the public will fill out beforehand and then the mayor will call on you...the card includes your name and address and the purpose/ subject of your comment. He explained this is for keeping track of comments for 'open records' purposes.

Next item - the council accepted the invitation to join the Georgia Municipal Association free of charge. Normally, membership would cost approximately $10,000 for a city our size but the GMA offered to waive the first year dues.  Jay Lowe stipulated that they would agree to first year free, but any subsequent years would need to be voted on before committing monies to join. The rest of the council agreed with Jay.

The first and main agenda item was a presentation on call centers from Kirsten, a '311' expert from CH2MHill...The presentation lasted about 40 minutes and it was obvious from the reactions of the council and the residents that it was overkill. She made the presentation based upon her experience running the call centers for Sandy Springs and Johns Creek (big surprise there!) and didn't seem to grasp the concept of 'limited services city'.  During the discussion after the presentation, under pressure from Alex Wright and Jay Lowe, consultant Kachmar finally conceded that CH2MHill's solution would likely cost the city about $150,000/ yr.  Even the mayor seemed a little taken aback at the size of the number.  It also pretty much killed the call center discussion for now.

Next item - consultant  Kachmar updated the council on the search for a city manager, saying they had received 48 resumes so far, many from out of state candidates.

Next item - city hall...the council have visited several sites and had basically narrowed it down to two locations, both in Tech Park.  One site has approx 5000 sq ft of space, and would need a bit of 'build out' to accommodate the council, staff and meeting areas...because of that, the 'rent' would be approx $20/ sq ft.  Site 2 has approx 8000 sq ft of space, but is already configured in a manner such that it requires little build out to meet needs, has better access and infrastructure and is available for $14/ sq ft.  The Council decided on site 2, even though it is a little larger than needed.  The attorney and consultant suggested that the council give the okay for them to negotiate the best deal and authorize the mayor to sign what they present.  Alex Wright and Jeanne Aulbach objected, and the council agreed that they should review any lease proposal prior to the mayor signing it.  Good call on their part.

Next item - The council adopted a fiscal yr to run from July 1st thru June 30.

Last item - The council adopted a set schedule for council meetings, effective June 19th, which will announce the schedule for the next few months...the reasons for this were: