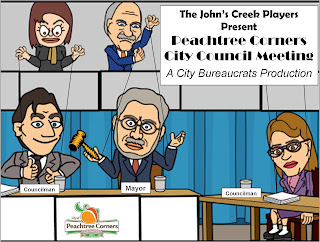 Well the first City of Peachtree Corners city council meeting is in the history books...and all I can say is “buckle up, it looks like its going to be a bumpy ride.”
Apparently the new mayor believes that any dialogue between the council and the citizenry should occur somewhere other than the council chambers. As he explained to one citizen who asked a question during the only ‘public comment’  period (before any city business was introduced)-  the plan is to have a few minutes at the beginning of each council meeting for citizens to approach the microphone and comment on the subject of their desire. The mayor made it clear he does not intend to engage in a conversation with anyone during this period, he will just nod his head, thank you for your input and move on to the next person. This policy needs to change. The mayor claims this is how ‘they’ do it, alluding to the cities of Johns Creek and Dunwoody. A check of both those cities websites reveals that their council meetings include public comment sections both before and after city business is introduced.
Then the council gets down to business. The mayor taps his gavel and asks the new interim city clerk "what’s next?" The clerk reads the next point of order, the mayor asks the council for their comments or questions, asks for yea votes and nay votes, taps the gavel again and says "the motion is passed". Repeat that scenario as often as the agenda dictates.
I spoke to one councilman after the meeting and voiced my displeasure with the idea that the mayor and council were just going to sit up there and 'proclaim' things without any public input. I was informed that 'most of the actual work' is done in work sessions which are open to the public. The meeting is just a formality. But then he goofed and admitted that there wouldn’t be any public input at the work sessions either.
Am I the only one who remembers the council candidates talking about how accessible they would be during the campaign? How they would listen to their constituents? Some even posted on our fb page that issues would be open to public comment for 30 days before the council would vote on them.
For those of you who didn’t attend the meeting, there are a few things you might like to know. Despite the fact your new city isn’t even a legal entity for 73 more days:
The one thing we do know about our new city attorney, city clerk, city consultant, and facilitator is that they are all currently employees of the City of Johns Creek. We hired the whole bunch of them.

We thought we elected a mayor and a city council. Apparently what we got was a Czar and his ruling cabal...or perhaps a puppet regime of the bureaucrats of John’s Creek. 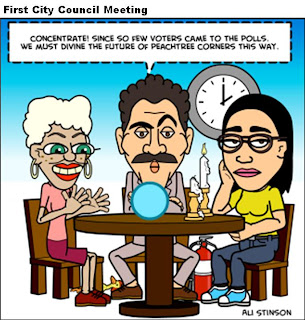 Yesterday's run-off finalized the last 4 contested seats for the inaugural city council of Peachtree Corners.  Turnout was very low with less than 12% of voters going to the polls.  Here is the new city council:


These six folks join mayor Mike Mason in the task of setting up the new city.  They will implement the 3 services proclaimed in the city charter: Code Enforcement, Zoning, and Trash Collection.  In addition, this council is challenged to settle a border dispute with Berkeley Lake, hire a city manager and other employees, procure office space, enter into vendor contracts, etc.


With so few voters turning out in this and the last election, the new council hardly has a strong mandate for sweeping action.  We expect that the members will act carefully and cautiously before committing the city and its tax payers to irrevocable, long-term obligations.  The council has been granted great power over many by very few.  They have the power to make taxes, code enforcement, fees, etc. a burden on citizens.  They should wield that power very delicately.