Peachtree Corners City Council Candidate Debate – How Did They Do? 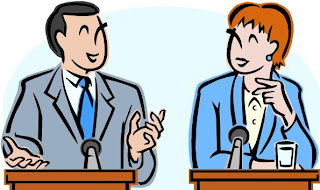 
Congratulations to all the candidates for running great campaigns.  The Peachtree Corners Ballot Committee appreciates how well you engaged with us on the issues.  We hope that Scott Ehrlich, Brent Johnson, and David Leader  will stay as engaged in the City and the issues as they were during their campaigns.  We look forward to seeing you on our Facebook Page and at future city meetings and events.
Posted by Peachtree Corners Ballot Committee at 5:33 AM 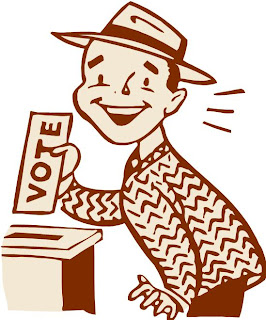 On Tuesday March 6, the voters of Peachtree Corners will go to the polls to elect their first city council.  The field is diverse.  A couple candidates seem to view a position on the council as a first step on their checklist to higher office.  One or two seem more focused on resolving their own personal issues with zoning or code violations.  Many are connected to the UPCCA and achieving what they were not able to achieve with volunteers through government dictate instead.  Some talk a lot and we are not sure what they mean.  But many seem genuine, un-political folks who really want what is best for the new city.
Where does the Peachtree Corners Ballot Committee stand in all this?  We are committed to being a watchdog group.  We want to make certain that the mayor and city council follow through on all the promises made during the campaign for cityhood.  We want to see the promise of the Charter fulfilled – 3 services, limited government, minimal taxes, open and transparent.  And above all, we want the city protected from special interest and “I know what’s best for you” politicians that usually run away with our various other governments.
You see, the Peachtree Corners Charter is protected from change, expansion, added taxes by the need to go to the voters in a city wide referendum.  We saw last week that quiet action by a politician or two and the Georgia State House can circumvent the Charter, dismissing our right to a vote.  The PCBC is committed to drawing attention to those that threaten the integrity of the Charter.  We will use all our tools – our writing, emailing, cartooning, blogging, Facebooking, calling, etc. to get voters and political leaders to take notice.  We are not afraid to employ a little snark and sarcasm as well if it helps get voters and council persons to pay attention to the implications of their actions.
So far, we have gotten most candidates to answer a slate of questions on the issues and posted those, unedited to our website.  We have engaged the candidates in a Facebook debate focused on several topics including:
Many candidates engaged and provided thoughtful answers.  Some we agreed with and some we challenged further.  Some candidates have decided not to participate.  They have ignored emails inviting them to engage and dismissed personal invitations to join in.  Visit our website and our Facebook page.  Read what those who want to reach the 43% who are skeptical about what this new city will bring and discern who thinks that group is not worth their time.
The Peachtree Corners Ballot Committee will not endorse specific candidates due to our status as a ballot committee.  We have challenged the candidates on the issues important to our small government, fiscally conservative, skeptical of the new city constituency.  Based on who participated in that dialogue and how they answered the questions presented, we believe voters can get a good feel for who will be focused on preserving the right to referendum and the small government, low tax promises the Charter attempts to ensure.
Vote on March 6!
Visit us at www.peachtreecornersfacts.com and on Facebook at http://www.facebook.com/pages/Peachtree-Corners-Ballot-Committee/228248203913501
Posted by Peachtree Corners Ballot Committee at 6:15 AM

Is the Peachtree Corners City Charter a Sham? 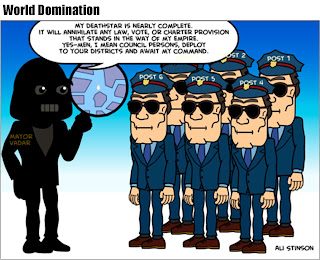 Many in Washington look upon the Constitution as an ancient document written by a bunch of old guys with almost no relevance to today.  It is ignored or circumvented when working within its bounds is deemed too cumbersome or inconvenient.  The Peachtree Corners City Charter is the city’s “constitution”.  It describes the boundaries of the city, how the city will function, how it will add services, elect officials and collect taxes.  It clearly states that the charter may only be changed by a referendum of the city’s citizens.  But a small group of politicians just changed the charter without any such vote by the citizens.
These politicians, including mayor-to-be Mason, the Berkeley Lake Mayor Salter and State Representative Tom Rice, met together, decided that a stretch of land along Peachtree Industrial would go to Berkeley Lake despite being ratified in the Charter as belonging to Peachtree Corners.  Bill 956 was passed by the State House on February 27, 2012.  It amended our charter by legislative fiat.  No citizen referendum.  Poof! 161 businesses are no longer in Peachtree Corners because a group of politicians banded together to go around the city’s “constitution.”  Promises were made during the vote for cityhood.  Those promises have already been broken.
Now, I believe that if a group of residents or businesses want to secede from the City, they should be allowed to do so by following the rules in the Charter and State Law.  What is shocking is how quickly Mr.  Mason and Mr. Rice directly circumvented a referendum because they saw the need to do so.  Mr. Rice has offered all sorts of “I know what’s best for you” reasons.  But rather than explain those reasons and let the citizens vote per the charter, he used his political power to simply act.  What else do these politicians think needs action and going to the voters is just too much trouble?  What do they think we need next:  Perhaps a police department, a big city hall, more tax revenue, more, more, more.  But we certainly need no votes by the citizens.  That is just too inconvenient and the voters won’t understand anyway.  They need the superior intellect of us politicians to tell them what is best!  Yikes folks.
In November, we didn’t vote to become a city because we wanted to write 'Peachtree Corners' on our return address- we voted to adopt the charter. The charter defined our boundaries. The charter was sold to all of us as having protections built into it that no other city had- it could not be changed without a referendum.  By legislative fiat, Tom Rice and his cronies just changed the charter without our vote.  This isn’t an issue of whether I pay the legal fees to fight Berkeley Lake annexation attempts, it’s much more fundamental than that.  The city we voted on in November will now no longer exist.  Is the charter still a legally binding document or not? And if it is, what good is the supposed requirement for a referendum if Tom Rice and his buddies down at the statehouse can sit down over a glass of bourbon and a good cigar and do whatever the hell they want to do anyway?  Remember that cities exist at the will of the legislature, so political friends there will allow quick changes to our Charter whenever it is convenient for them.  And the rights of we the citizens are just so much lip service.
Be sure to vote on March 6.  Be sure to pick people absolutely dedicated to protecting your right to referendum laid down in the Charter.   Do not surrender this city to the elitist “I know what’s best for you whether you like it or not” politicians.  Mike Mason looks to be that kind of politician.  Figure out who his friends are and who is a thorn in his side and make sure we have a council that will stick up for us.  Candidates, show us if you have any thorns please.  Post your comments on our Facebook Page.
Posted by Peachtree Corners Ballot Committee at 5:38 AM