To Tad or Not to TAD - What are Tax Allocation Districts and Should Peachtree Corners Make Use of Them?

Last week Patch reported on the city's plans to seek redevelopment powers in order to stimulate development in the Holcomb Bridge Rd corridor. Much of the article centered on the proposed use of TADs (Tax Allocation Districts) to accomplish redevelopment goals, but didnt go into much detail about what a TAD is and how it works. Hopefully some of the following information will be helpful.

Tax Allocation Districts are sometimes called TIFs (Tax Increment Financing) because they are based upon the incremental increase in tax revenues. Basically, the city designates an area as blighted, or economically underdeveloped. It then issues bonds to raise money specifically for making improvements within the TAD. These improvements are usually in the form of infrastructure- roads, sidewalks, sewers, stormwater drainage and even public transportation. The public improvements the city makes coupled with the private redevelopment it (hopefully) spurs cause property values in the TAD to rise. As the property values rise, so does the amount of money those properties pay in property tax. That increase in the amount of taxes paid is put in a special account and used to pay off the bonds.

Although TADs have been in use for years, the jury is still out as to how well they work. Many point to Atlantic Station as a great example of a TAD at work. The site of the former Atlantic Steel plant was designated as a brownfield; the old steel plant was an eyesore and the land around it was polluted from the fallout of years steel production. In 1999 the assessed value of the property was $7 million. The City of Atlanta floated $67.5 million worth of TAD bonds to help pay for nearly $190 million in cleanup and infrastructure improvements to the site. By 2008 the assessed value of the property was $452 million and it was generating an incremental increase in tax revenues of $8.3 million per year to the City of Atlanta- more than enough to pay off the bonds in thirty years. But since then, the economy at large has been in recession. Stores and restaurants at Atlantic Station have closed, condos have gone unsold and apartments have become vacant. The area has developed (no pun intended) a reputation for cruising and crime. A real estate professional and resident of Atlantic Station likened it's downward spiral to Underground Atlanta. The accompanying drop in property values has reduced the amount of 'incremental increase' in taxes to the city. Time will ultimately tell if it is successful.

A TAD to redevelop residential areas near 'the square' in Marietta is facing similar difficulties. As a result of the recession, several of the developers involved have gone bankrupt leaving some of the area undeveloped. Those who bought 'early' have seen their home values decline and the city has seen tax revenues decrease, although not enough yet to put the TAD bonds at risk. As with Atlantic Station, time will tell if the TAD is successful.


Sometimes there are other municipal costs associated with a TADs that are not covered by the increase in tax revenues. The increased development may create an increased need for services like police and fire. Since the funds generated by the TAD are earmarked to pay the bonds, the increase in the cost of services is borne by the city.
What happens if the TAD doesnt live up to expectations? The AJC reported a couple of years ago that the taxpayers of Kansas City were stuck for $6 million in 1999 for a TAD gone bad. In Georgia, the laws regarding the use of TADs are much stricter. Cities are not allowed to pledge general revenues to back the bonds. The investors who buy the bonds bear the loss if the bonds default. John Matthews, a professor of policy and planning at Georgia Tech has studied and written extensively about TADs. In the event of a default he believes that "bond ratings could suffer and interest rates rise" on future bond issuances, and he says that cities are seen as having a "moral" duty to guarantee the bonds.
Unanswered as yet is what Peachtree Corners would do with a TAD given that the municipal contribution to the TAD is infrastructure improvement. As a limited services city, Peachtree Corners cant build roads, sidewalks or sewers and cant run buses or trolleys. Does the Redevelopment Powers Act give them these powers? The mayor claims that it does not. Is Holcomb Bridge Road blighted or economically underdeveloped? I think most would agree that portions of it are unsightly, mostly as a result of haphazard zoning and a diverse collection of architectural styles, but not blighted.
Perhaps a CID independent of the city would be better suited to the city's purposes.
Originally Published in the Peachtree Corners Patch on March 25th, 2013 by Bob Martell
Posted by Peachtree Corners Ballot Committee at 11:47 AM 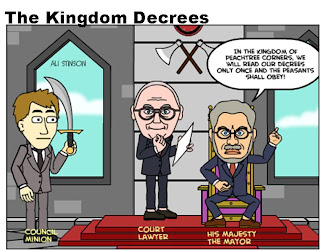 The city of Peachtree Corners is designated as a very unique form of government - a city-lite.  This is because the city is charted by the state legislature to provide just three services - 1. Planning and Zoning  2. code Enforcement  3.  Trash Collection.  The city has not even been functioning a year and only one of the 3 services is completely operational.  Yet the council and mayor are already looking to expand their powers.  Tonight's city council meeting has two items on it that attempt to do just that.
1. The council is looking to pass an ordinance removing the second read requirement to pass ordinances in the future. This is a problem because it gives us, the citizens, no time to react to the proposed law before the council can vote it into being. They argue that this is holding up businesses who need zoning changes and that the second read is really moot because they could hold back to back meetings to meet the second read requirement. We are OK with the idea of changing the second read requirement on business zoning issues that have already passed the zoning commission vetting process. We do not want the council's powers expanded to pass any ordinance this way. They may circumvent the requirement by holding the back to back meetings, but then we would at least be alerted to the fact they are up to no good and trying to block citizen input. We want the ordinance eliminating the second read to have tighter, more limiting language.

2. The council wants to expand the charter to allow them to provide a 4th service. The resolution reads "A Resolution of the Mayor and Council of Peachtree Corners, Georgia requesting the local legislative delegation of Peachtree Corners, Georgia to introduce a local law authorizing Peachtree Corners, Georgia to have redevelopment powers pursuant to the redevelopment powers law; and for other purposes."  It appears they will put this on the ballot for a November referendum. We believe they are already breaking their promises to keep this a city-lite with this expansion of powers. We think they should get the other 3 services implemented and running smoothly before they try to convince us they deserve more power and more money to spend.

Add this to the elimination of the second read in item 1 above and you have recipe for all sorts of abuse without the citizens able to react or voice their objections before the council buys land, builds infrastructure or otherwise spends tax money the way they want.

You can read the full agenda here: http://www.cityofpeachtreecornersga.com/1__2013-03-05_-_City_Council_Agenda.pdf

Posted by Peachtree Corners Ballot Committee at 11:21 AM