May 22 City Council Meeting: A Bait and Switch? 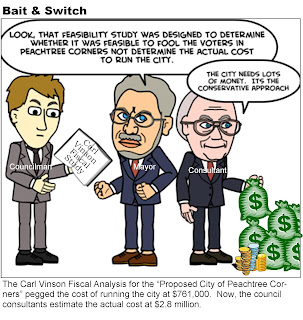 
The most enlightening and alarming item discussed  was the Organizational Structure agenda item.  The consultants provided a draft/sample budget for what it will cost to run the city.  Given the size of the staff and the services expected, they are estimating $2,869,225 to run the city.  This is nearly FOUR times the cost estimate in the Carl Vinson study touted by the Vote Yes group and State Senator and city sponsor Tom Rice during the cityhood campaign.  Alex Wright, Post 3, was visibly baffled by the idea that the two estimates were not even on the same planet.  Mayor Mason, a major player in the Vote Yes campaign, dismissed the study just short of rolling his eyes at the idea that anyone would believe it.  He said that The Carl Vinson study is not a budget it is just a feasibility study.  It was for Tom Rice and the legislature and not meant to determine the cost to run the city.
Mr. Wright questioned the consultants throughout the tax and budget presentation.  The consultants recommended building up large reserves and contingency funds to which Mr. Wright responded, “It is against my personal philosophy to build up large reserves. I want to prevent government waste.”  The consultants scoffed at the idea that any waste would occur in government.
At the current $2.8 million cost estimate, the city will need the full 1 mil in taxes allowed by the Charter.  All the Vote Yes promises that property taxes probably would not be needed at all to cover the expenses of the city are so quickly up in political campaign smoke.  The city council must vote on the exact level of millage that property owners will pay.  Before the vote, the council must advertise the millage rate under consideration and hold 3 meetings for the public to comment before the vote.  The consultants recommend advertising the full millage allowed by the Charter.  Councilman Wright seemed to bristle at the idea that so much would be needed given the Carl Vinson study.  The consultants assured him that it was the conservative and responsible way to go about it and their later budget discussion showed why.  The advertisement will occur on June 21.  The first hearing will be the morning of July 2, the second at 6:30 PM July 2nd, and the final meeting and vote on July 9th at 7:30 PM.
During this discussion, Mr. Kachmar let it be known that the councilpersons and mayor are not required to attend the hearings on the 2nd.  They may assign staff to take down public comments.  The PCBC is greatly disturbed by the suggestion that our elected officials would delegate listening to their constituents to hired staff and consultants rather than be present themselves and hope that they all reject this suggestion.
We also hope Mr. Wright sticks to his guns on expenses and taxes.  We hope he recruits some other council-members to stand firm against the mayor and the consultants on dismissing the Carl Vinson study, absorbing the full one mil in available taxes, and on stockpiling massive amounts of money for “rainy days” and nebulous “community investment projects”.
Other items covered in the meeting:
The consultants presented a list of properties for the council to consider renting.  They reviewed their evaluation criteria.  4 of the 5 properties are in Tech Park.  They expect to make a final recommendation at next week’s meeting.
The RFP for city banking services was provided.  Councilman Weare Gratwick, At Large Post 6, excused himself and left the room during the discussion.  Mr. Gratwick works for a bank and wanted to avoid any accusation of impropriety or undue influence on the council discussions.  The RFP will be released in the coming days.  Ms. Jeanne Aulbach, Councilperson At Large Post 4, will serve on the RFP evaluation team with the consultants and lawyer.
They ended the session with a rushed discussion of a call center to respond to citizen inquiries.  The YMCA was shutting its doors so the council was instructed to think about the kind of services they want to provide and what a call center might do for a later discussion.
Councilpersons in attendance: Jay Lowe - Post 2; Alex Wright – Post 3; Jeanne Aulbach – Post 4; Lorri Christopher – Post 5; Weare Gratwick – Post 6; Mike Mason – Mayor.  Phil Sadd – Post 1 was not in attendance.
Posted by Peachtree Corners Ballot Committee at 3:39 AM 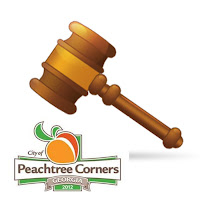 The Peachtree Corners City Council had a special “called” meeting yesterday at 11:00 AM at the Peachtree Corners YMCA.  There was only one major item on the agenda: Whether to submit a request to the County for a moratorium on all permitting, zoning applications, business licenses etc.
The lawyer – Bill Riley - laid out the argument that there is often a rush to the county for permits before a new city takes over.  He argued that folks will get caught having started the process under the county and may have to finish under the city causing confusion.  He recounted stories of troubles between Johns Creek and Fulton County.  Specifically that the county collected permit and inspection fees, but the city had to do the work because of the timing of the takeover.  That work had to be done without the funding because the county refused to turn over the money collected.  Although he says he does not anticipate any issues with Gwinnett officials, he is seeking to avoid this transition trouble through the moratorium.  In addition, he cautioned that without the moratorium, adult bookstores, massage parlors, etc. often try to slip into the area, believing that the county process will be easier than any new city process is likely to be.
The councilpersons asked some good questions.  Wright, Aulbach, Lowe, and to a lesser extent Christopher and Gratwick all challenged the lawyer on the implications of doing nothing, the burden on businesses unable to get a license during the moratorium, etc.  Phil Sadd was not at the meeting.  The mayor had no questions for the attorney.  The discussion went on for a bout 25-30 minutes before the council was satisfied and voted to approve the request to the County.
Overall, I was satisfied with how the council handled this meeting.  The questions they asked were in my mind as well. I was pleased to see them challenge the lawyer’s recommendation, require examples of when the worst happened in reality, and explore the implications and burdens on residents and businesses that the moratorium may cause.
My dissatisfaction all centers on the speed that the meeting was called.  Most of us had only about 12 hours notice that it would occur.  It gave off the impression of a rushed, “secret” meeting, held at a time when most folks work and cannot attend.  The meetings are supposed to be announced in the Gwinnett Daily Post in advance.  The acting city clerk assured me that she contacted The Post last week.  Myself and others in attendance let her know that we were unable to locate that announcement, finding out through The Peachtree Corners Patch instead.  She promised to investigate the issue.
I talked to a couple of the councilpersons afterward, spending quite a bit of time with Jeanne Aulbach, Post 4.  I let her know that I felt this meeting ran better than the first one because we saw the council explore the implications of the issue before them.  They challenged the guidance they were getting to ensure it was sound and as many sides were examined as possible.  The last meeting was a series of approvals and hires without any feeling that due diligence had been done.  Those of us attending the meetings expect to see our council really engage and vet the issues, but it appeared they simply abdicated their responsibility to a contingent of Johns Creek bureaucrats.  Ms. Aulbach promised to do more to communicate with her constituents – which includes everyone in Peachtree Corners – so we see the due diligence happen and can better understand the trade-offs and ultimate decisions reached.
Posted by Peachtree Corners Ballot Committee at 4:20 PM