The Bridge from Citylite to Big Government 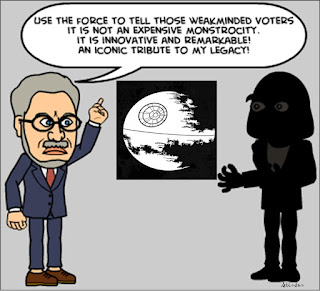 It was barely four years ago Mike Mason was the president of the United Peachtree Corners Civic Association on the campaign trail to sell us all on a new concept in local government that he branded "city-lite".   As the story went, this was a brand new form of government.  A city chartered for only 3 services - trash collection, code enforcement, and planning and zoning.  He touted a financial study that said the whole thing could be run for $750,000.   It was all very simple.  He promised local control of whether and where apartments would be built and cheaper trash.  That was the mission and the cost of the proposed city of Peachtree Corners a mere four years ago.

Here we are four years later.  Mason is now Mayor.  The city has a budget nearing $10 million dollars, debt nearing $20 million*, a cash slush-fund of $22 million, and a series of residential zoning approvals that include hundreds of new apartments.  The city owns two large tracts of land including the property across from the Forum and a stake* in the old Simpsonwood retreat.   And now they are planning a monstrosity of a pedestrian bridge to span 141 and connect the Forum to the strip mall across the street.

City employees give lofty presentations that this bridge will be an everlasting, iconic structure to rival the Eiffel Tower and Washington Monument.  It will reflect Peachtree Corners mission to be "innovative and remarkable".   It will last the ages.  It will bring businesses and jobs.  It will inspire your twenty-something kid to get out of your basement and into their own apartment.  I would not be surprised if it solved world hunger and made Iran really and truly America's friend.   It is a wonderful, magical bridge... that connects Sprouts to Belk over a busy four-lane highway.

Gone is all the talk of a small, un-ambitious, fiscally minuscule, little city government.  No one utters the word city-lite anymore.  No one refers to or remembers the city charter with its three little services.  The talk of a $750,000 budget was abandoned before the last vote for the first city council was counted.   The cost of this magical bridge between two shopping malls has yet to be disclosed.  The city represents that it will be funded by a Special Purpose Local Option Sales Tax - SPLOST.  They intimate that this funding mechanism somehow means it is free and that SPLOST is a permanent endless supply of dollars rather than a tax that must be approved by tax-payer vote.

The idea of city-lite was a great sales pitch to convince a citizenry skeptical of politicians and sick to death of big government to vote it into existence.  It turns out this was just marketing.  After all, who wants to be mayor of a city known for cheap trash pickup and not much else.  Now the city is to be "innovative and remarkable."  We should accept that apartments are not really apartments if they are labeled "millennial housing".  And that a giant, meandering pedestrian bridge spanning a busy highway is some magical conduit to higher property values and better paying jobs.

So is this a bridge to some glorious future or just another tribute to government expansion and political ego?   Is the marketing of the bridge as a necessary feature real or just a way for six-figure salaried city employees to justify their existence?  Is there any way to bring back city-lite and the lofty promise of something so small and unobtrusive?  Or are we doomed to watch the government grow ever-larger and ever more deaf to the desires of the citizens that brought it into existence?

A poll on the Bridge is available here: http://m.ajc.com/news/news/local/peachtree-corners-bridge-designs-bring-out-divided/nq2mr/  Send a message by choosing "No Bridge".

* Update 4-12-16 of clarifying points: The city's debt is currently about $12 million.  This is a result of the purchase of the land across from the Forum.  The council voted late last year "By a 5-2 vote the Council voted to authorize $15.25M in bonds for the DDA to use for projects related to the Town Center project."  This is authorization to issue debt, but is not yet actual debt.  Additionally, although an AJC article referenced here led us to believe the city purchased a stake in Simpsonwood, members of city hall have informed us the $2 million was a "gift" to the church to make the deal with the county happen.  No ownership interest was purchased for those dollars.
Posted by Peachtree Corners Ballot Committee at 7:23 AM